We headed out in search of a few markets this morning. As we walked through Palermo, we couldn’t help but notice all of the graffiti. Rome also had it’s share, but it struck me differently in Palermo because so much of it was on the statues and historical buildings here. 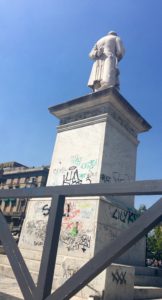 We arrived at the first market of the day, Mercato di Capo. We were sure to keep our bags close to us, as many people, including Anthony’s family have told us that pick pockets are a big problem in Palermo.

As we arrived, the first thing we saw was an older gentleman selling bread from his truck! The bread has been fantastic in Sicily so far. 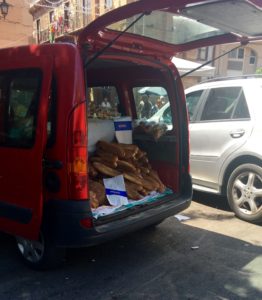 As we wandered through, all of the fruits and veggies were so fresh and vibrant in color! 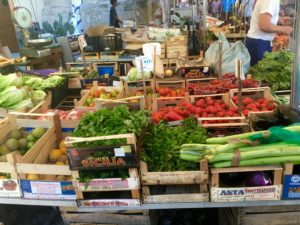 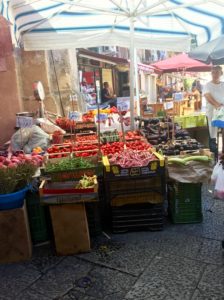 One of my favorite parts were the large bunches of fresh herbs! 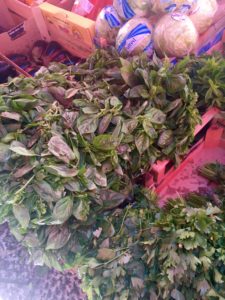 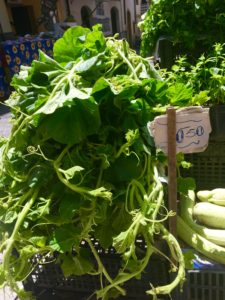 The eggplant had such a beautiful color too! 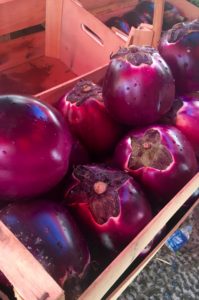 Have way through the market, we spotted the susine! 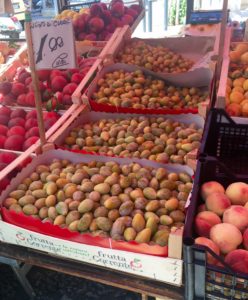 We got some to eat along the way and it was so good! It is almost a mix between a grape and a plum. 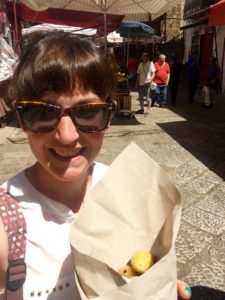 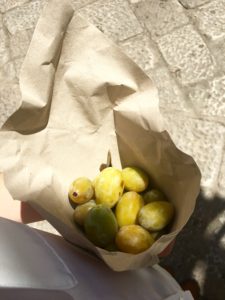 Shortly after buying our susine (only 1 Euro!), we stumbled upon a beautiful church, Monumentale Chiesa Dell’Immacolata Concezione. It was built in 1612! 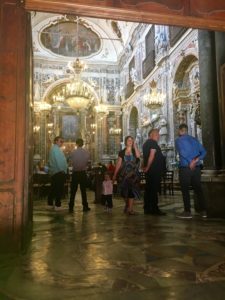 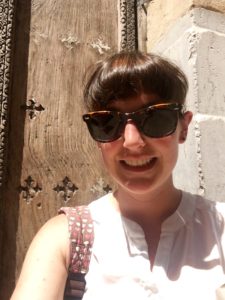 We continued to wander through the streets until we found the second market of the day . It was much of the same thing, just located in a different area of town.

After our visits to the markets, we found the Palermo Cathedral. 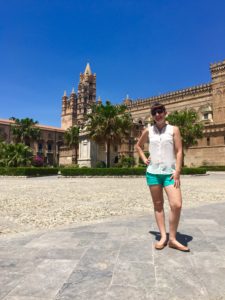 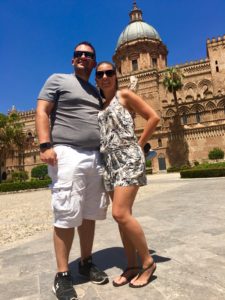 It was beautiful from the outside and just as amazing on the inside. Once inside, we saw that we could purchase a ticket and travel up to the roof and from the roof, we would be able to walk around the dome. We had to walk up a long, winding set of stairs to get there! They were very narrow and seemed like they were going to continue forever! We finally made it to the top and the view was spectacular! We took the opportunity to take a few pictures and enjoy the view before we headed back down the winding staircase! 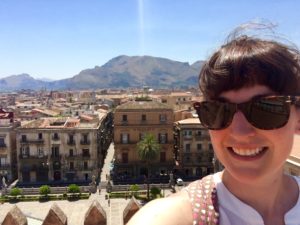 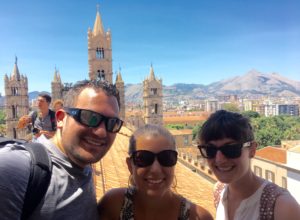 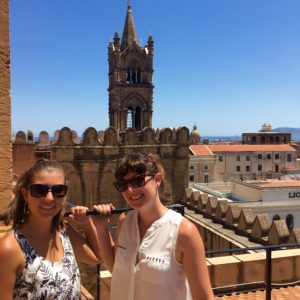 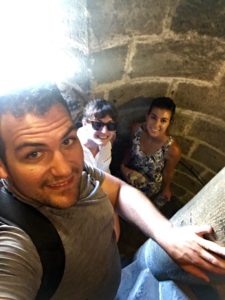 We tried to go to a couple more markets after we visited the Palermo Cathedral, but it was too late in the day and they were mostly closed up. We did make our daily gelato stop though! 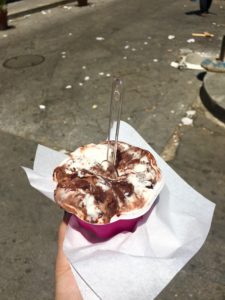 The view down the streets in Italy is always so beautiful. This one was better than most because it had the Italian flags! 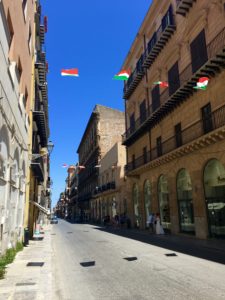 We walked down to the water and relaxed on a small beach and after our visit to the water, we headed back to hotel to get the car.

We met Anthony’s cousin, Veronica in the Piazza in Termini. We spent the afternoon with her and she showed us around town. We walked around with her, taking in all of the views. She took us to the local park and as we walked around, we learned a little more about her life and she learned a little more about ours. We found a few more photo opportunities and had a little fun on the playground too! 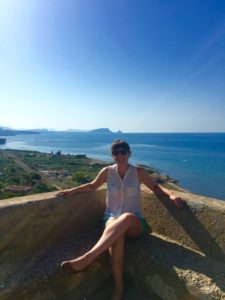 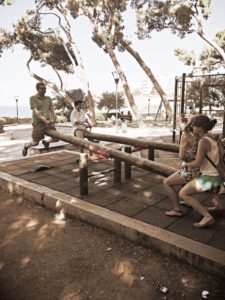 Veronica took us to a local gelato place called Cicciuzzu. It was originally opened by a local couple and after they passed away, the kids have continued the tradition of homemade gelato. 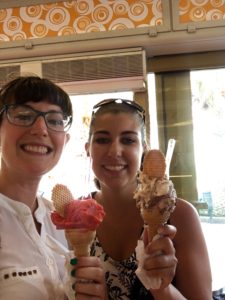 After our gelato, Veronica took us to the local beach in Termini, where she had spent the morning with friends. After seeing the beach there, we were looking forward to the next day when we would be heading to the beach!

On our way to Veronica’s home, we made one last stop at Nonno’s childhood home. 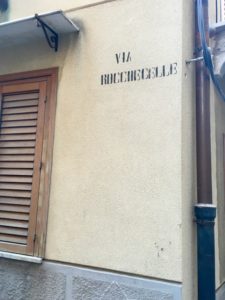 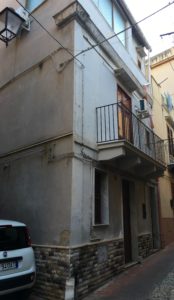 Veronica’s parents, Zio Enzo and Zia Mella welcomed us into their beautiful home. The view from their balcony was amazing. 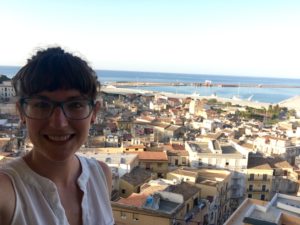 Not only did they welcome us with open arms, but also with an amazing meal! Another Aunt and Uncle came by and we all ate dinner together. The meal started with spek, olives, homemade pickled artichokes and an assortment of cheese. It continued with sicilian bread, local fish made into patties, homemade sausage and leftover sicilian pizza from the night before. We finished the meal with a simple and delicious salad. We had an assortment of fresh fruit for dessert. The meal was wonderful and it was great to be surrounded by such great people! 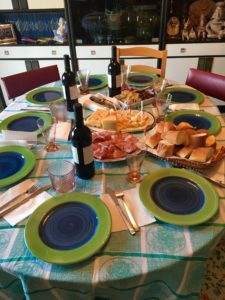 We relaxed on their balcony and talked while we had gelato and espresso (the best so far on this trip!) We took a few more family photos before it was time to say goodbye. After just 2 short days spent with them, we already feel so close and are already talking about Veronica’s trip to the US! 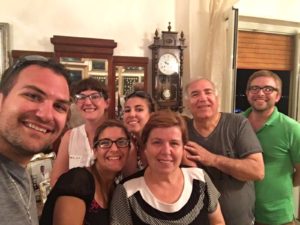