Today I am going to begin with a short review (rant) of the not so lovely (horrible) London Premier Kensington Hotel. I am hoping that someone who is researching this hotel will read this and choose not to stay here. We are paying the most we have payed for anywhere during our trip to stay here and although it is not the smallest room we have stayed in, it is absolutely the worst. To begin, breakfast is not provided with our high cost per night stay. (I would absolutely recommend a Guest House or a Bed & Breakfast to anyone traveling. The cost is less than half of this hotel in particular and they cook you a great meal!)

On the London Premier Kensington website, they claim to have free wireless internet. Once we got here, we were not happy to find out that their “free wireless internet” is only in the lobby of the hotel. The lobby of the hotel is tiny and consists of 2 small couches that sit right in front of the check in desk. They do offer broadband internet in each room, but of course, ours doesn’t work properly. Where our room is located, we were lucky enough to use some of the wireless internet that was offered in the lobby. Our room must be situated right above it, so although it was slow, we were able to use it (with many interruptions in the service). That is, until tonight. Tonight, it was horrible, so I am currently sitting in the tiny lobby; and even down here, the internet is awful. It took me an hour and a half to upload a few photos that should take 10-15 minutes.

The next awful thing about the hotel is that it is situated right next to where the trains run. When you look outside our window, we literally can see the train tracks. In an earlier post, I had mentioned that the trains run every 3-5 minutes. Last night, we listened and timed the trains and they literally ran every 30-45 seconds. All day and all night. We thought we might get used to them but it seems as though they have only gotten louder! They are so loud that I can hear and fell them when I am in the shower!

As I sit down here, I hear complaint after complaint. They are all the same as mine. It just confirms that they are not only my complaints but they are very common! Literally every person except one complained about something. The one that didn’t complain said, “No complaints..tonight” meaning they had already complained!

Other than the hotel itself, London had been wonderful so far. The weather has cooperated and we have been able to do so much exploring! Today was full of it!

We woke up and headed to the Tube. Our first stop was Westminster. When we got off the underground and took a short walk, finding ourselves in front of Westminster Abbey. This church charged admission to go inside, so instead, we admired it from the outside. It was huge and gorgeous! After taking a short break in the grassy area next to Westminster Abbey, we headed to see Big Ben and Parliament! We had seen these last time we came, but we were in such a rush! It was nice to see them again and enjoy them! The weather was perfect and the sun was shining! We headed over the bridge and had a fantastic view of the London Eye. We walked around for a while, enjoying the sunshine and the beautiful views! Today was a hot one! We walked all the way down the river and made our way to an odd looking bridge. It was a lot skinnier than all of the other ones, but still fun to explore! We could see St. Paul’s Cathedral from the bridge too! Below the bridge, a band was playing with drums, a trumpet and an organ! There is music all around this city!

After walking even further, we discovered Tower Bridge. We didn’t get a chance to see this up close last time we were here! It was fantastic! We went over the bridge and we found the Tower of London! 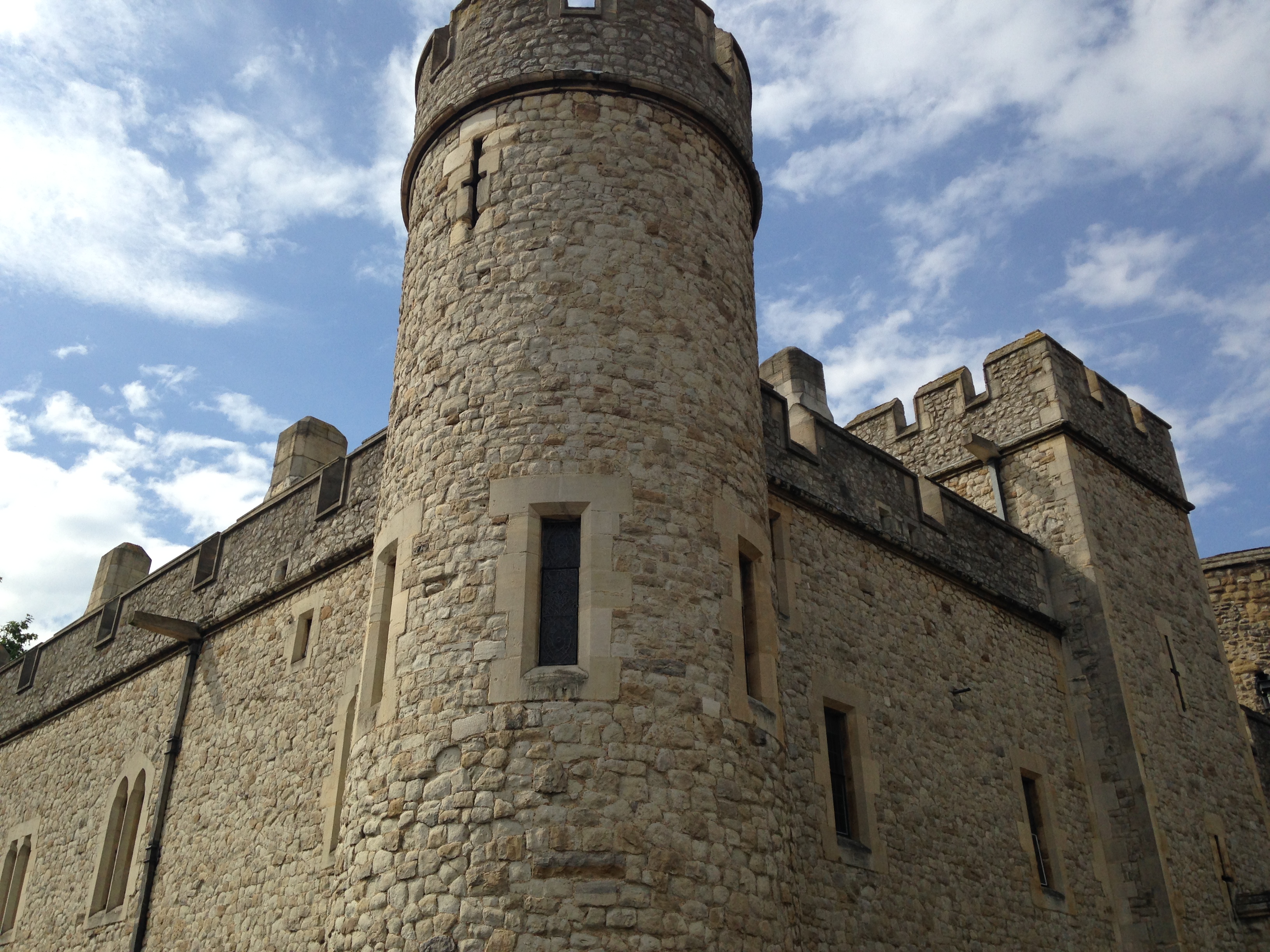 At this point, we had walked a long way away from Big Ben and that area of the city. We still had to see Buckingham Palace, so we headed back in the correct direction! We felt as though we had been walking forever. We saw a Tube stop and decided to take that instead! We are god we did too! We were 5 stops from Buckingham Palace. It would have been a long walk!

We made our way over to the Palace and there was more going on in that direction than just tourists. As we walked up, we could see a line of people, dressed in suits, holding green tickets waiting to get it. We couldn’t figure out what kind of an event could have been going on, but we wish we had brought our suits! After coming home, Brad did a little research and we realized that the Queen was at the Palace while we were visiting. There were 2 guards at the entrance. If the Queen was not there, there would have only been one. (There was only one the last time we visited). Also, the Royal Standard flag was flying, which also indicated she was there! How exciting! 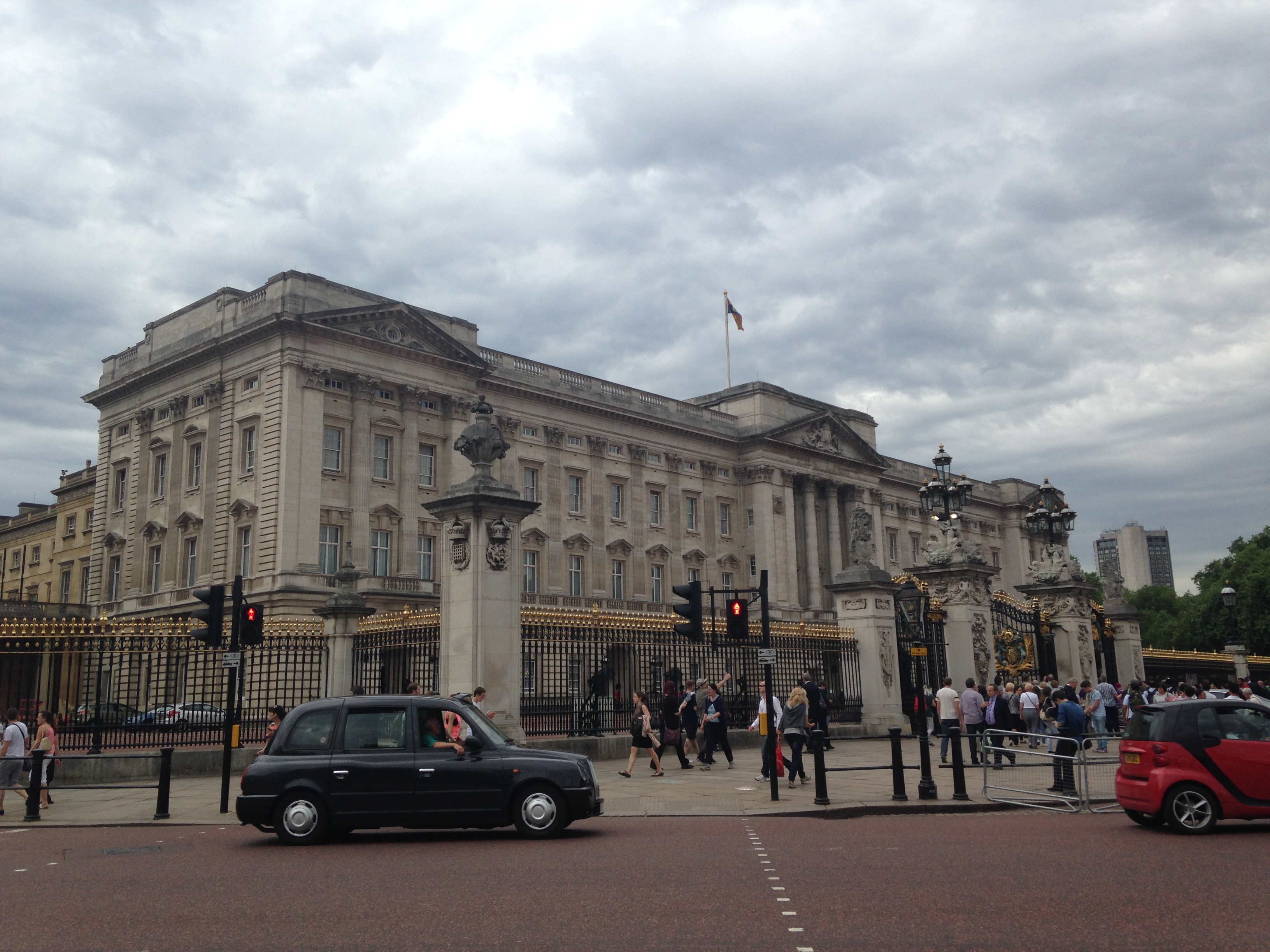 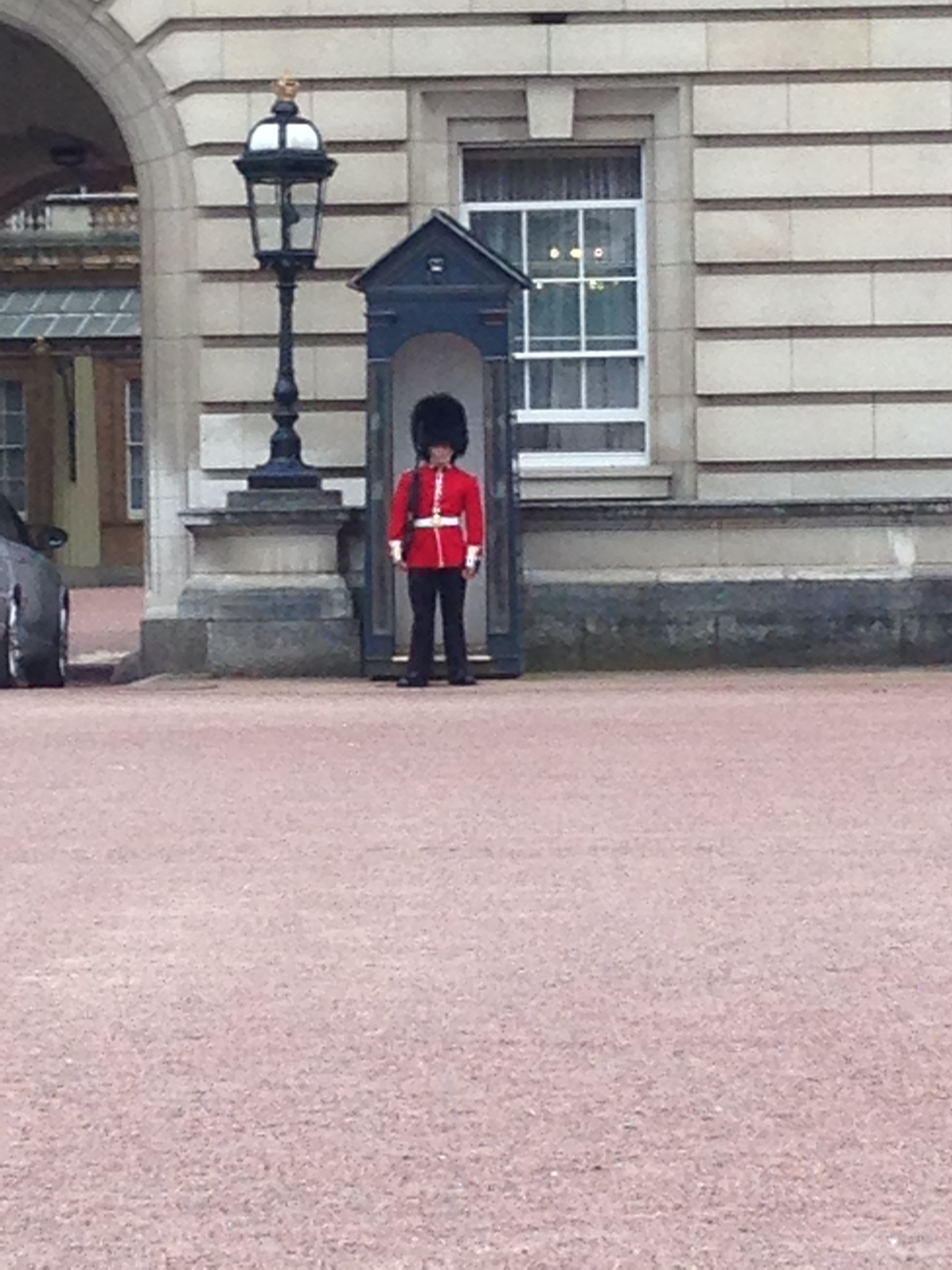 At this point, the sky was beginning to be covered by clouds and it looks as though it was going to rain. We walked for a little while and found a near by pub called The Shakespeare. I had fish and chips for the first time while on this adventure and it was very good! 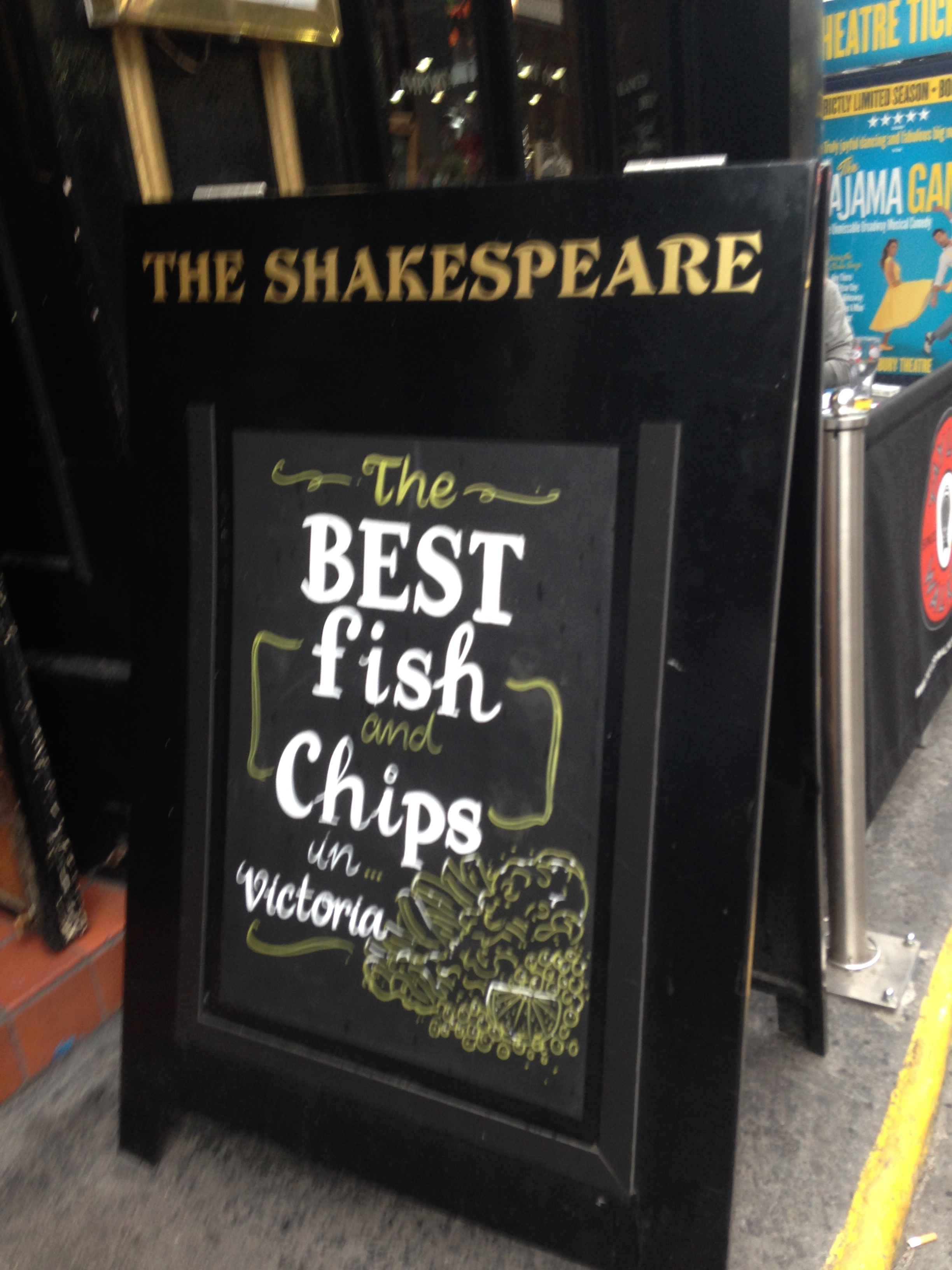 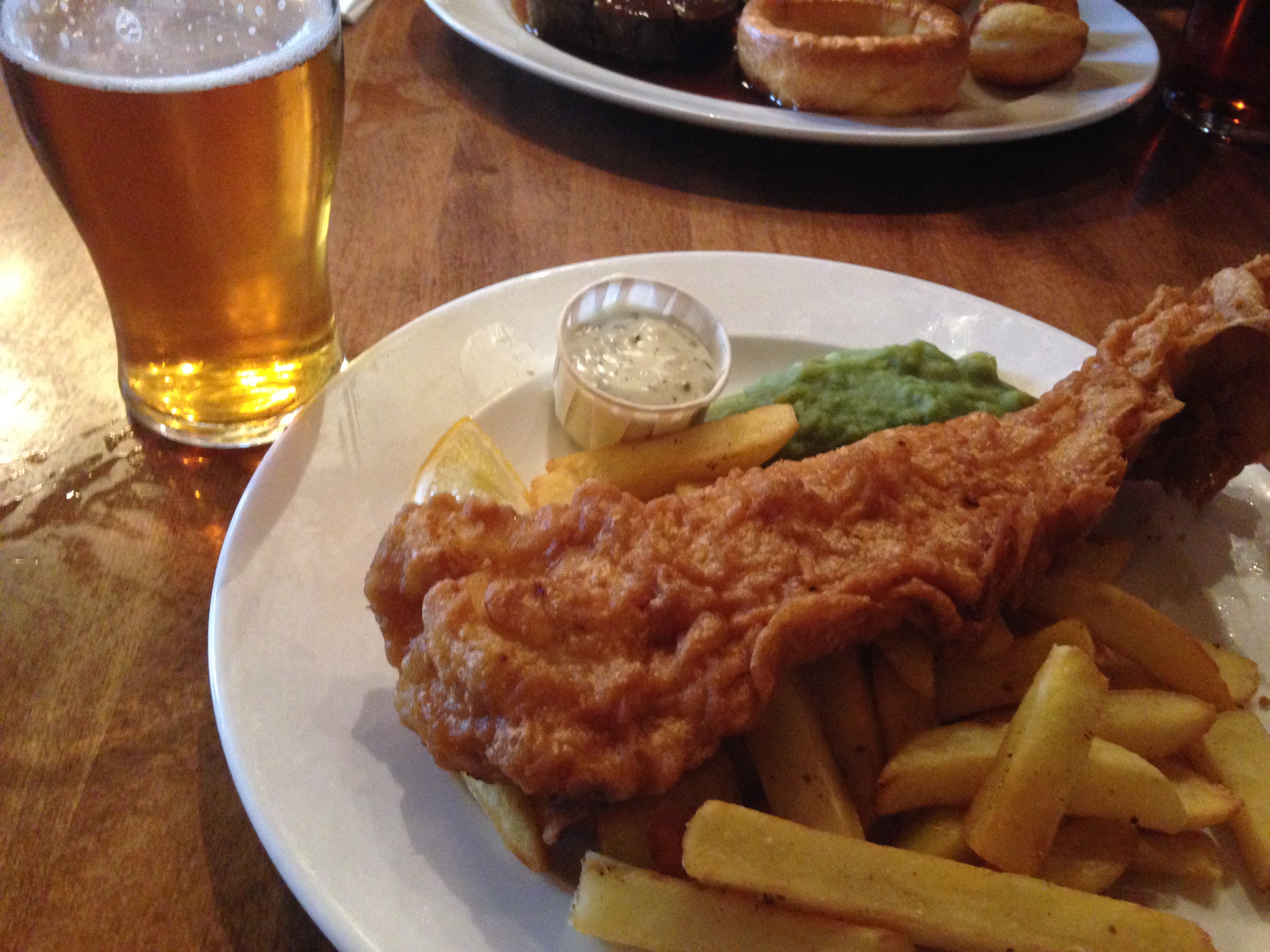 When we left the pub, it started to rain. Luckily, the underground was right across the street! One our way home, we stopped for dessert. This time, instead of the Co-Op, we stopped at a little bakery a couple doors down. I again, got a chocolate danish, but I have to admit, the ones at the Co-Op were better!

Our journey is starting to come to an end. Today will be our last full day in London. Today, we are heading to Handel’s house, back to the Camden Market and to ride a red double decker bus!